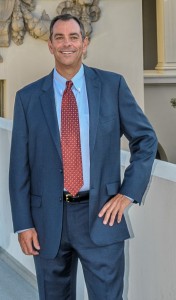 A.J. Hazarabedian is the firm's founder and currently serves as Of Counsel with the firm. The vast majority of his nearly thirty years of experience has been almost exclusively in eminent domain, inverse condemnation and appellate litigation. A.J. has successfully handled hundreds of eminent domain matters for property owners, business owners and public agencies, having taken a substantial number of cases to successful verdict and numerous others to successful settlements. His case experience over his career ranges from matters involving tens of thousands of dollars all the way up to tens of millions of dollars.

After obtaining his B.A. in Economics from the University of California at Davis, A.J. graduated in the top 5% of his class, cum laude, from Loyola Law School, where he was an editor of the Loyola Law Review and was elected as a member of the Order of the Coif, St. Thomas More and Alpha Sigma Nu Honor Societies. He has been practicing law since 1988. He was formerly a partner with Oliver, Vose, Sandifer, Murphy & Lee before leaving to form California Eminent Domain Law Group, APC in 2004. Prior firm experience also includes Alschuler, Grossman & Pines and McMurry, Russ, August, Kabat & deRecat.

A.J. has been a speaker at local, national and international legal conferences on the subject of eminent domain, including at the American Bar Association and International Right of Way Association's annual meetings. He has been interviewed on the topic of eminent domain on both regional and national news broadcasts, including on CNN Headline News and Fox News Channel. Martindale-Hubbell recognizes A.J. as an AV Rated® attorney, the highest rating available to any individual lawyer. A.J. has been named to Southern California Super Lawyers® in the field of eminent domain for several years in row, a distinction reserved for the top 5% of attorneys in their field as chosen by their peers, and is recognized by Best Lawyers in America® in his practice of eminent domain law.

In addition to his regular practice of eminent domain law, A.J. has served as a court appointed mediator in eminent domain matters as part of the Los Angeles Superior Court mediation panel, and served on the Condemnation and Land Valuation Committee of the Los Angeles County Bar. He also served for several years as an Adjunct Professor at the University of La Verne School of Law, where he was elected by the student body as Outstanding Adjunct Professor.